A chord of a circle is equal to its radius. Find the angle subtended by this chord on any point in the major segment. 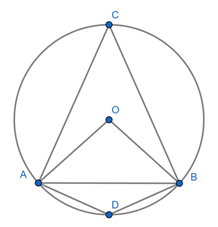 Given a chord of a circle is equal to its radius.

∴ ΔOAB is an equilateral triangle.

Each angle of an equilateral triangle is 60°.

∴ Angle subtended by this chord at a point on the major arc is 30°.

How useful is this solution?We strive to provide quality solutions. Please rate us to serve you better.
PREVIOUSThe circumcentre of a triangle ABC is O. Prove that ∠OBC + ∠BAC = 90°.NEXTIn figure, ∠ADC = 130° and chord BC = chord BE. Find ∠CBE.
Related Videos

Prove that if the bisector of an angle of a triangle and the perpendicular bisector of its opposite side intersect, then they intersect at the circumcircle of that triangle.

If in any circle arc AB = arc BA, then the arc is—

In figure, if AOB is a diameter of a circle and AC = BC. Then ∠CAB is equal to—

If in congruent circles two arcs are equal, then their corresponding chords will be—

The degree measure of major arc is—

The circumcentre of a triangle ABC is O. Prove that ∠OBC + ∠BAC = 90°.