In which of the f

If we consider BC to be the base of the triangle,

The sum of two sides AB and AC is not greater than the third side. Hence triangle cannot be formed. 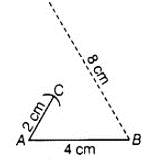 In the second option the sum of two angles is 200° which is greater than 180° and hence triangle is not possible as sum of all interior angles of a triangle should be equal to 180°. 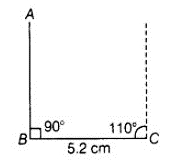 In the third option a unique triangle is possible.

So the correct answer is C.

How useful is this solution?We strive to provide quality solutions. Please rate us to serve you better.
PREVIOUSWhich of the follNEXTWhich of the foll
RELATED QUESTIONS :

If we rotate a ri

What are some com