Given, to construct an angle of 90° from the initial point of a ray and then we should justify if the constructed angle is 90°.

ii. Now as point A is the initial point as the centre, draw an arc any radius such that, the arc meets the ray AB at point C.

iii. With C as centre and with the same radius as before, draw another arc cutting the previous one at point D.

iv. Now with D as centre and with the same radius, draw an arc cutting the first arc (drawn in step ii) at point E.

v. With E and D as centers, and with a radius more than half the length of DE, draw two arcs intersecting at point F. 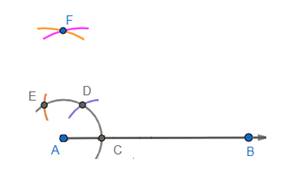 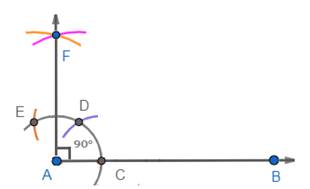 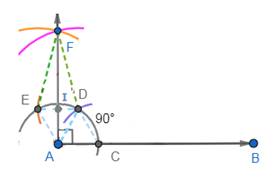 From the construction, we can say that


Thus, as all the sides are equal ΔADC is an equilateral triangle.


Now, in an equilateral triangle each angle is equal to 60°.


Similarly, if we consider ΔADF,


From (1) and (2) we can say that, ∠ DAE and ∠ DAC are alternative angles for the line AD, thus making ED parallel to AC.


(As F is formed by the arcs with same radius)


From (4) we can say that, point F lies on the perpendicular bisector of DE.


(where I is the point where FA bisects DE.)


Consider the lines AF, AC and DE. Here AF is the transverse to the parallel lines AC and DE.

Now use these adv