If perpendiculars from any point within an angle on its arms are congruent, prove that it lies on the bisector of that angle. 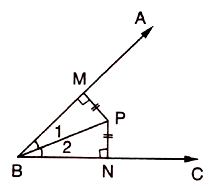 Given that perpendiculars from any point within an angle on its arms are congruent.

We have to prove that it lies on the bisector of that angle.

Now, let us consider an ∠ABC and let BP be one of the arm within the angle.

Draw perpendicular PN and PM On the arms BC and BA

They meet BC and BA in N and M respectively.

So, by RHS congruence rule, we have

BP is the angular bisector of ∠ABC

How useful is this solution?We strive to provide quality solutions. Please rate us to serve you better.
PREVIOUSABC is a triangle in which BE and CF are, respectively, the perpendiculars to the sides AC and AB. If BE=CF, prove that ΔABC is isosceles.NEXTIn Fig. 10.99, AD ⊥ CD and CB ⊥ CD. If AQ=BP and DP =CQ, prove that ∠DAQ = ∠CBP.
Related Videos

Quiz | Are You Master of Triangles?48 mins

In two triangles one side an acute angle of one are equal to the corresponding side and angle of the other. Prove that the triangles are congruent.

In the adjoining figure, P is a point in the interior of ∠AOB. If PL ⊥ OA and PM ⊥ OB such that PL=PM, show that OP is the bisector of ∠AOB 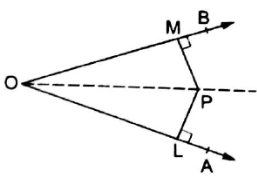 In the given figure, ABCD is a square, M is the midpoint of AB and PQ ⊥ CM meets AD at P and CB produced at Q. prove that (i) PA=BQ, (ii) CP=AB+PA.

In triangle ABC and PQR three equality relations between some parts are as follows:

State which of the congruence conditions applies:

In triangles ABC and PQR, if ∠A=∠R, ∠B=∠P and AB=RP, then which one of the following congruence conditions applies:

ABC is an isosceles triangle in which AB = AC. BE and CF are its two medians. Show that BE=CF.

In two triangles ABC and ADC, if AB = AD and BC = CD. Are they congruent?

If Δ ABC ≅ Δ ACB, then Δ ABC is isosceles with 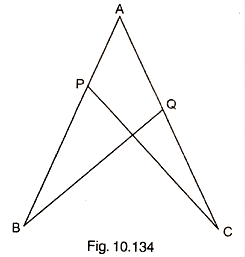