To prove: the orthocenter of ΔABC is the point A 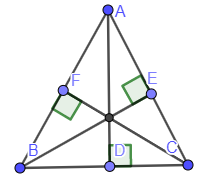 P is the orthocenter of ΔABC

As we know that orthocenter is the point of all the perpendicular bisectors of the sides of a triangle.

As AD, BE and CF are the perpendicular bisectors

We can say that ADꞱBC,

How useful is this solution?We strive to provide quality solutions. Please rate us to serve you better.
PREVIOUSThe medians AD, BE and CF in a triangle ABC intersect at the point G. Prove that 4(AD + BE + CF) > 3(AB + BC + CA).NEXTThe medians AD, BE and CF in ΔABC pass through point G.(a) If GF = 4 cm then find the value of GC.(b) If AD = 7.5 cm then find the value of GD.
Try our Mini CourseMaster Important Topics in 7 DaysLearn from IITians, NITians, Doctors & Academic Experts
Dedicated counsellor for each student
24X7 Doubt Resolution
Daily Report Card
Detailed Performance Evaluation
view all courses

The orthocentre of ΔABC is H. The mid-points of AH, BH and CH are respectively x, y and z. Prove that the orthocenter of ΔXYZ is also H.

The medians AD, BE and CF in ΔABC pass through point G.

The median AD, BE and CF in a ΔABC intersect at point G. Prove that

ΔABC is an isosceles triangle in which AB = AC, the mid-point of BC is D. Prove that circumcenters, incentre, orthocenter and centroid all lie on line AD.

Prove that the sum of two medians of a triangle is greater than the third median.