Form (A ⊂ B) it’s clear that the set A is a subset of B which means all the elements of set A are in B. 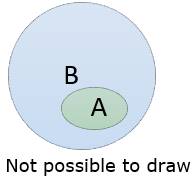