The statement (A ⊂ B) indicates that set A is a subset of set B which mean that all values of set A are in set B.

A union operation between two sets generate a new set which contain all the elements of the two sets. 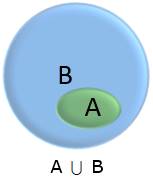 How useful is this solution?We strive to provide quality solutions. Please rate us to serve you better.
NEXTIf A <span lang="
Related Videos