Social Studies Application: Remembering that 1AD came immediately after 1BC, while solving these problems take 1BC as –1 and 1AD as +1.

We have been given that, 1 AD came immediately after 1 BC.

Thus, 720 is the span of years the Greeco-Roman era has lasted.

B. AD, that is, Anno Domini is considered to be counted in ascending order.

We are given the information that,

Bhaskaracharya was born in 1114 AD.

His age can be calculated by taking difference between the year of his birth and death.

Given that, Queen Nefertis ruled Egypt about 2900 years before Turks ruled in the year 1517 AD.

D. Remember that AD came immediately after BC.

Water level in a well was 20m below ground level. During rainy season, rain water collected in different water tanks was drained into the well and the water level rises 5 m above the previous level. The wall of the well is 1m 20 cm high and a pulley is fixed at a height of 80 cm. Raghu wants to draw water from the well. The minimum length of the rope that he can use is 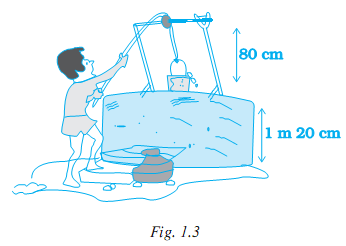 Write a pair of integers whose product is – 36 and whose difference is 15.

State whether the statements are True or False.

We can write a pair of integers whose sum is not an integer.