Enumerate the functions of the Supreme Court.

The Supreme Court is the uppermost and ultimate superior court of record and is authorized to exercise its powers, subject to the provisions of the Constitution. The court rulings take priority over all lower Courts. Consisting of the Chief Justice of India and a maximum of 30 other judges, it has extensive powers in the form of unique, decision-making and advice-giving control.

The functions of the Supreme Court are:

• It takes up petition primarily against verdicts of the high courts of various states of the Union and other courts and tribunals.

• It protects the fundamental rights of citizens and settles an argument between various governments in the country.

• It hears matters which may specifically be referred to it under the constitution by President of India.

• It also may take matters on its own, without anyone drawing its attention to them.

• The law declared by the Supreme Court becomes compulsory on all courts within India and also by the union and state governments.

How useful is this solution?We strive to provide quality solutions. Please rate us to serve you better.
PREVIOUSAnswer in brief.Why are laws necessary in society?NEXTAnswer in brief.Which are the provisions that preserve the independence of the judiciary?
Related Videos 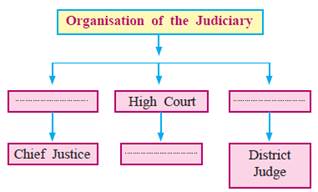 Organise a ‘Moot Court’ in your school, prepare and ask questions related to Public Interest Litigations in this Moot Court.

Enumerate the functions of the Supreme Court.

Why are laws necessary in society?

Choose the correct option and complete the statements.

Choose the correct option and complete the statements.

The Chief Justice of Supreme Court is appointed by ____

Which are the provisions that preserve the independence of the judiciary?

Why were the first elections difficult to conduct? List as many reasons as you can.

Draw the graphs for the following tables of values, with suitable scales on the axes.

A. Cost of apples

B. Distance travelled by a car

(ii) What was the time when the car had covered a distance of 100 km since it’s start?

C. Interest on deposits for a year.

(i) Does the graph pass through the origin?

(iii) To get an interest of Rs 280 per year, how much money should bedeposited?