Each of the plate

The area of the capacitor plates, A

The distance in between each pairs of plates, d

The emf of the connected battery, V 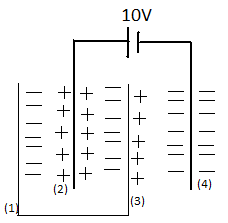 The oposite charges will be induced in plates 1) and 3), whe the battery is connected as shown.

So, there will be three capacitors that are formed namely, 1-2, 2-3 and 3-4. And they are connected in series arrangement.

Let’s assume that each capacitors has a charge Q, and since they are connected in series, the total charge will also be Q.

Equivalent capacitance of the arrangement.

Now, for series arrangement, we know

Since area and the separation of all the plates are same,

Capacitance of the capacitor,

εo is the permittivity of the free space

A is the area of the plates of the capacitor

d is the separation between the plates of the capacitor

Substituting the given values in the above equation, we get

Hence, from eqn.1, the charge on each pairs will be,

Hence, charge on the plates connected to battery will be 2

Hence the charge on the specific plates will be ±0.16μC