• A grass embryo is an example of a typical dicotyledonous embryo.

• It consists of an embryonal axis and two cotyledons.

• The portion of embryonal axis above the level of cotyledons is the epicotyl, which terminates with the plumule or stem tip.

• The cylindrical portion below the level of cotyledons is hypocotyl that terminates at its lower end in the radical or root tip.

• The root tip is covered with a root cap. 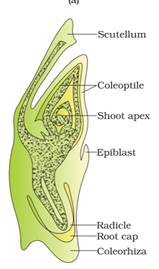 • The seminiferous tubule are the site within the male testes where the sperm germinates, matures and gets transported from.

• Each seminiferous tubule is lined on its inside by two types of cells called male germ cells (spermatogonia) and Sertoli cells. 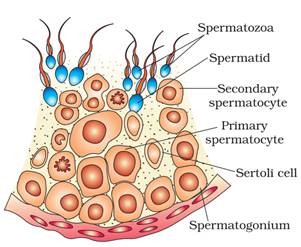