Binary fission and budding are two common methods of asexual reproduction. Binary fission is found in unicellular organisms like Amoeba, Paramecium and Euglena, to name and few. Budding is found in Yeast and Hydra.

Amoeba is a shapeless tiny unicellular organism that has a porous cell membrane which encloses the cell organelles and cytoplasm. Amoeba reproduces by the common asexual reproduction method called binary fission. After replicating its genetic material through mitotic division, the cell divides into two equal sized daughter cells. The genetic material is also equally partitioned; therefore the daughter cells are genetically identical to each other and the parent cell. In this process, the nucleus of the Amoeba first divides to form two daughter nuclei by the process of Karyokinesis. After the nucleus has divided into two, the process of Cytokinesis takes place in which the cytoplasm in the mother cell divides into two daughter cells. This leads to the formation of the two daughter Amoebae cell having a nucleus and its own cell organelles. 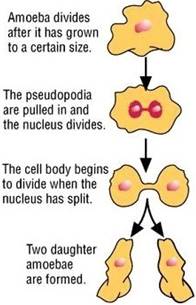 Cytokinesis is the process of the division of the cytoplasm. It corresponds to the separation of the daughter nuclei into two daughter cells. Cytokinesis occurs immediately after mitosis.

How useful is this solution?We strive to provide quality solutions. Please rate us to serve you better.
PREVIOUSMention the essenNEXTA beam of white l
Related Videos