Draw a sketch of

A sketch of Bohr's model of an atom with three electron shells is shown below: 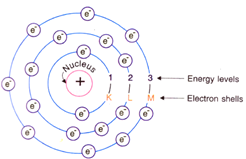 According to Bohr’s model of an atom:

(i) Only certain special orbits known as discrete orbits of electrons, are allowed inside the atom.

(ii) While revolving in discrete orbits the electrons do not radiate energy.

These orbits are called energy levels. Energy levels in an atom are shown by circles.

How useful is this solution?We strive to provide quality solutions. Please rate us to serve you better.
PREVIOUSOn the basis of RNEXTWhat do you think
Related Videos

What are the reas