Magnification = Height of Image/Height of Object

(i) Distances measured perpendicular to and above the principal axis (along + y-axis) are taken as positive.

(ii) Distances measured perpendicular to and below the principal axis (along –y-axis) are taken as negative.

Magnification is positive for erect images and negative for inverted images.

Thus, magnification is positive in part (i) and (ii). 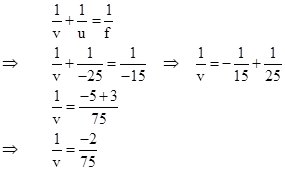 so, we place screen at a distance 37.5 cm from the place, in front the mirror. 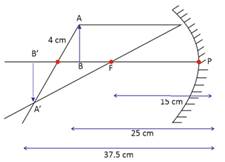 How useful is this solution?We strive to provide quality solutions. Please rate us to serve you better.
PREVIOUS(a) What is the lNEXT(a) What is an el
Related Videos