3. How Do Organisms Reproduce

(i) Testes – These are main reproductive organs in male. They are located outside the abdominal cavity in scrotum. The testes produce male germ cells called sperms. It also produces male sex hormones called testosterone.

(ii) Scrotum – It is a muscular pouch which houses the testes. It is present outside the abdominal cavity and maintains a lower temperature than the normal body temperature.

(iii) Epididymis – It is a coiled tube which stores the sperms temporarily.

(iv) Vas Deferens - It is a long tube which carries the sperms from epididymis to another tube called urethra.

(vi) Penis - It is an organ which passes the sperms from the man's body into the vagina in the women's body during mating. 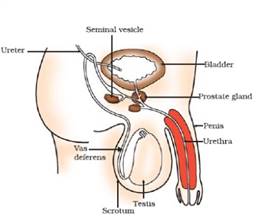 How useful is this solution?We strive to provide quality solutions. Please rate us to serve you better.
PREVIOUSName the organs which produce sperms in human males.NEXTWhat is the role of seminal vesicles and prostrate gland in human male reproductive system?
Related Videos

How do Organisms Reproduce (Part-1)26 mins

i. Write the functions of the following parts human male reproductive system:

i. Write the functions of the following parts of human male reproductive system:

Draw a neat and labeled diagram showing longitudinal section of a bisexual flower.

What are the functions of testes in the human male reproductive system? Why are these located outside the abdominal cavity? Who is responsible for bringing about changes in appearance seen in boys at the time of puberty?