In humans, the sound is produced by the box, which is called voice box or the larynx. Larynx is a part of the throat. It is responsible for production of sound. It has two vocal cord which are stretched across the voice box or larynx in such a way that it leaves a narrow slit between them for the air. When the lungs force the air through the slit, the vocal cords vibrate, producing sound. 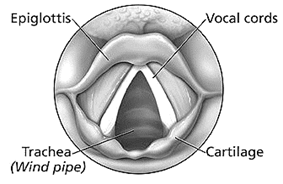 Draw a neat and l

Does any part of

Each pair of arms