Draw a diagram of 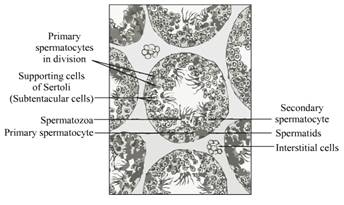 The various parts are:

1.Primary Spermatocytes: These are diploid in number (2n) which divide through meiosis.

3. Spermatozoa: It is the motile sperm.

4. Spermatids: These are motile haploid gametes formed from secondary spermatocytes.

6. Supporting cells of sertoli:These cells facilitates the movement of germ cell to spermatozoa.

How useful is this solution?We strive to provide quality solutions. Please rate us to serve you better.
PREVIOUSStudy the figure NEXTWhich one of the
Try our Mini CourseMaster Important Topics in 7 DaysLearn from IITians, NITians, Doctors & Academic Experts
Dedicated counsellor for each student
24X7 Doubt Resolution
Daily Report Card
Detailed Performance Evaluation
view all courses