8. How do organisms Reproduce?

Draw a diagram of the longitudinal section of a flower exhibiting germination of pollen on stigma and label (i) ovary, (ii) male germ-cell, (iii) female germ-cell and (iv) ovule on it.

Diagram of germination of pollen on the stigma 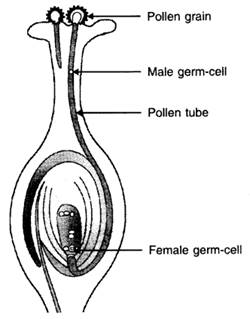 i) Ovary – The ovary is part of the carpel which is the female reproductive part of a plant. The ovary encloses the ovules that get fertilized by the pollen grains.

iv) Ovules – The ovule is present inside the ovary and it grows into a seed after it is fertilized by the male germ cells.

How useful is this solution?We strive to provide quality solutions. Please rate us to serve you better.
PREVIOUSDifferentiate between the fission of Leishmania and Plasmodium.NEXT(a) Draw the longitudinal section of a flower and label the following parts.(i) Stigma(ii) Style(iii) Anther(iv) Ovary(b) After fertilisation in a flower, mention the structures that develop into the embryo and seed.
Related Videos

How did Humans Evolve33 mins

In a bisexual flower inspire of the young stamens being removed artificially, the flower produces fruit. How is it possible?

Draw a neat diagram of fate of pollen after landing on stigma. Also, label the following parts.

Differentiate between plumule and radical.

(a) What are particles A ? What is the process of transferring A from one flower to another flower of similar plant by the insect known as ?

(c) What is C which moves down through the tube B?