This is a chart of proven reserves of major minerals of Tamil Nadu in 2001 by Department of Geology and Mining with figures in tonnes. 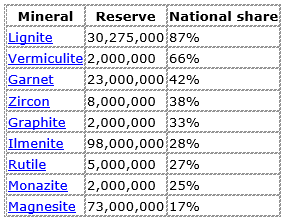 'NLC India Limited (NLCIL) formerly Neyveli Lignite Corporation is a 'Navratna' profit making, Government of India Enterprise engaged in mining of lignite and generation of power through lignite based thermal power plants. NLCIL was established by GoI in 1956, following the discovery of lignite deposits in Neyveli, Tamil Nadu. NLCIL comes under administrative control of Ministry of Coal, GoI and serves as an important source of power generation to the states of Tamil Nadu, Andhra Pradesh, Karnataka, Kerala, Telangana, Rajasthan and Union Territory of Puducherry. NLCIL currently operates four open cast lignite mines of the total capacity of 30.6 Million Tonnes per Annum (MTPA) and five thermal power stations with a total installed capacity of 3240 MW. The company, through its subsidiary NTPL, has also recently commissioned a 1000 MW coal based power plant (comprising 2 Units of 500 MW capacity each), 10 MW solar plant and 30 MW wind power plant thus bringing the total installed capacity of the company to 4280 MW.

The purposes of the project are: