Give a brief desc

1. This method is used to separate volatile liquids from non-volatile impurities or a mixture of those liquids that have a sufficient difference in their boiling points.

2. Principle:- It is based on the fact that liquids having different boiling points vaporises at different temperatures. The vapours are then cooled and the liquids so formed are collected separately.

3. For example:- a mixture of chloroform(b.p.=334K) and aniline(b.p.=457K) can be separated by the method of distillation. The mixture is taken in a round bottom flask fitted with a condenser. It is then heated. Chloroform, being more volatile vaporises first and passes into the condenser. In the condenser, the vapours condense and chloroform trickles down. In the round bottom flask, aniline is left behind.

4. The distillation set up is shown here: 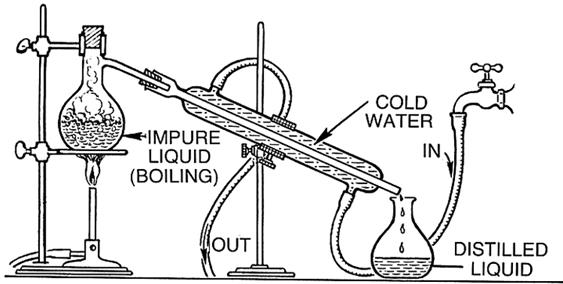