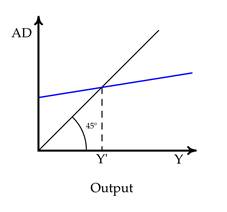 The 45° line represents all points at which aggregate demand and aggregate supply (total output) are equal. The AD curve is the upward-sloping curve that starts from a point above the origin. The point where AD curve intersects the 45-degree line is the equilibrium point. This point represents the total output that the economy produces and sells without creating any disturbances in the economy. The 45-degree line depicts the points where AD=AS. Any deviations of AD from this point is bound to create economic distortions either in the form of the inflationary gap or deflationary gap.