Answer the following questions in not more than 150 words.

Discuss the factors responsible for imbalances in the sex-age found in different parts of the world and occupational structure.

The age-sex structure of a population refers to the number of females and males in different age groups. The two variables are represented in a population pyramid, the shape of which reflects the characteristics of the population

Based on the shape of the pyramid, there are three trends observable in any population, these are:

Expanding Population: represented in a triangular shaped pyramid with a wide base, is typical of less developed countries. These have larger populations in lower age groups due to high birth rates. 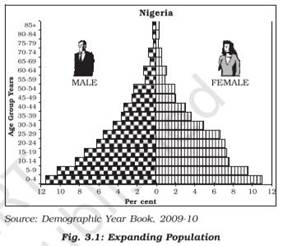 Constant Population: represented by a bell-shaped pyramid that tapers towards the top. Such populations have almost equal birth and death rates, leading to a near constant population. 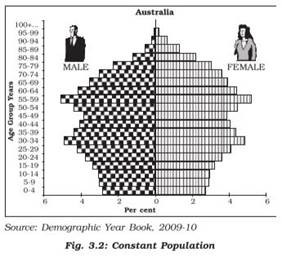 Declining Population: represented by a narrow base and a tapered top, such pyramids show low birth and death rates. The growth rate for such a population is usually zero or negative. 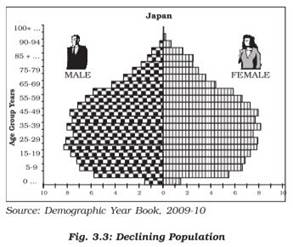 How useful is this solution?We strive to provide quality solutions. Please rate us to serve you better.
PREVIOUSAnswer the following questions in not more than 150 words.Describe the rural-urban composition of the population.
Try our Mini CourseMaster Important Topics in 7 DaysLearn from IITians, NITians, Doctors & Academic Experts
Dedicated counsellor for each student
24X7 Doubt Resolution
Daily Report Card
Detailed Performance Evaluation
view all courses

What was the main aim of the ‘Tribal Sub-Plan’ introduced in 1974 in Bharmaur area? Review its contribution to the development of the Bharmaur region.

Which state of India has the highest percentage of population below poverty line?

What is the meaning of density of population? Examine the four geographical factors that influence the distribution of the population in the world with suitable examples.

What is the age structure? Interpret with an example the triangular shaped age-sex pyramid.

two groups. How are they different from each other? Explain.

What is the average sex ratio in the world?

Solve each of the following systems of equations using matrix method.

Why did Gandhi agree to a settlement of 25 per cent refund to the farmers?