Belgium is a small country in Europe and shares its border with Netherlands, France, and Germany. It has a population of over one crore. The problem here is the complexity of the ethnic composition in Belgium. Of the total population - 59 per cent lives in the Flemish region and speaks the Dutch language; 40 per cent people live in the Wallonia region and speak French and 1 per cent of the Belgians speak German. In the capital city Brussels - 80 per cent people speak French whereas 20 per cent are Dutch- speaking.

Sri Lanka which is located a few kilometers off the southern coast of Tamil Nadu has a population of two crores. Being an island nation, it has a diverse population. It consists of Sinhala-speakers which constitute 74 percent of the total population and is Buddhist, and the remaining 18 percent are the Tamil-speakers are mostly Hindus and Muslims. Now among the Tamil speakers, there are two types of Tamils – Sri Lankan Tamils who are the natives of the country and the Indian Tamils whose forefathers worked as plantation workers in Sri Lanka. 7 per cent are the Christians and are both Tamil and Sinhala. 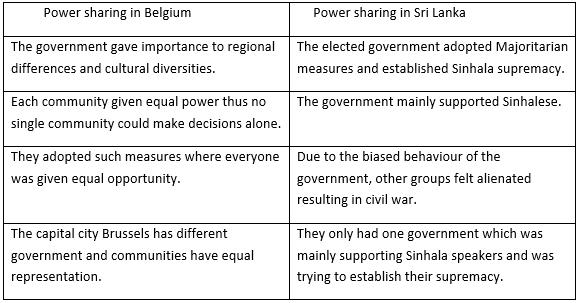 How useful is this solution?We strive to provide quality solutions. Please rate us to serve you better.
PREVIOUSWrite a short notNEXTExplain the summa
Related Videos