Answer in a word or two

Answer the following in one or two sentences

Work Book Fill in the blanks

Work Book Answer in a word or two

Work Book Answer the following in one or two sentences

Design an experiment to demonstrate hydrotropism.

The orientation of plant part in response to water is called hydrotropism.

How useful is this solution?We strive to provide quality solutions. Please rate us to serve you better.
PREVIOUSDefine transpiration.NEXTThe bending of root of a plant in response to water is called __________.
Related Videos

a) Which bends in the direction of gravity but away from the light.

b) Which bends towards light but away from the force of gravity.

Design an experiment to demonstrate hydrotropism.

A potted plant is kept horizontally for a considerable time. The three positions of the part A and B of the potted plant are shown in the following figures.

(i) Potted plant with shoot and root growing downward. (Diagram to be drawn) 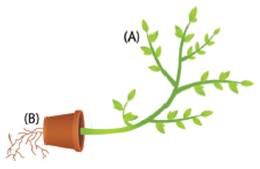 a) Which figure shows the correct position taken by the parts A and B of the plant?

b) What type of phenomenon is exhibited by the figure by (A) in the figure (ii)?

Complete the following table with the different types of tropism:

Give an example for negative hydrotropism.

Name the part of plant which shows positive geotropism. Why?

Study the pictures below and then complete the table by putting a plus (+) if the shoot or root grows towards the stimulus and a minus (-) if it grows away from it. 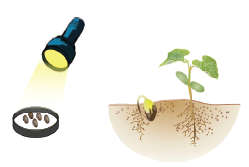 Assertion (A): If the plant part moves in the direction of gravity, it is called positive geotropism.

While conducting experiments to study the effects of various stimuli on the plants, it was observed that the roots of a plant X grow and bend towards two stimuli A and B but bend away from a third stimulus C. The stem of the plant X however bends away from stimulus A and B but bends towards the stimulus C. The stimulus B is known to act on the roots due to factors related with Earth. Keeping these points in mind, answer the following questions:

a) What could be stimulus A ?

b) Name the stimulus seen in B.

c) What could be stimulus C ?

The plant part which exhibits negative geotropism is __________.

In each of the figures given below,

is a rectangle. Find the values of