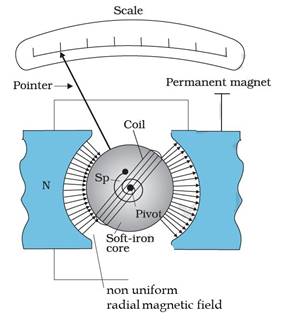 
This torque is given by.

N is the number of turns, I is current, A is the area of c.s., B is the strength of the magnetic field.

that balances the magnetic torque NIAB, resulting in a steady angular deflection

where k is the torsional constant of the spring, i.e. the restoring torque per unit twist. The deflection

is indicated on the scale by a pointer attached to the spring. We have.

The term NAB/k is constant for a given galvanometer and is referred to as current sensitivity, i.e.,

No a galvanometer cannot be used to measure current as such because it is highly sensitive to even slight fluctuation in current. If such a large values of current can destroy the galvanometer. 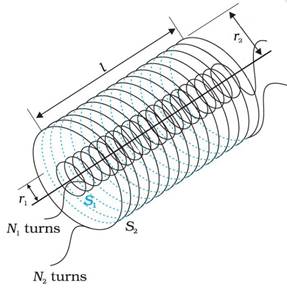 When a current I2 starts to flow in S2, it in turn sets up a magnetic flux through S1. Let us denote it by F1. The corresponding flux linkage with solenoid S1 is


The mutual inductance of solenoid S1 with respect to solenoid S2 is known as M12. The magnetic field due to the current I2 in S2 is,


The resulting flux linkage with coil S1 is,


where the total number of turns in solenoid S1 is denoted n1l. Thus, from Eq. (a), we can write,


The mutual inductance is