• He grew Streptococcus pneumonia bacteria on a culture plate.

• He killed the bacteria by heating them. He observed that heat-killed S-strain bacteria didn’t kill the mice.

• Then he injected the mice with a mixture of heat-killed S and live R bacteria, the mice died.

• Moreover, he recovered living S bacteria from the dead mice.

• Some ‘transforming principle’ transferred from the heat-killed S strain bacteria, had enabled the R strain to synthesise a smooth mucous coat and become virulent. 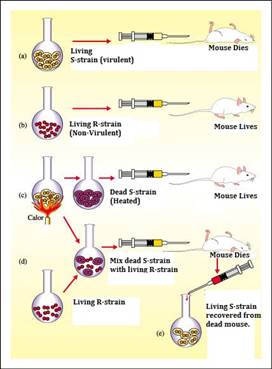