Describe the structure of a human kidney with the help of a labelled diagram. Kidneys are reddish brown in colour, bean shaped, situated between the last thoracic and third lumbar vertebra level close to the dorsal inner wall of the abdominal cavity.

Towards the centre of the inner side of the kidney is a notch called hilum through which ureter, blood vessels and nerves enter.

Inside the kidney, there are an outer cortex that extends in between the renal columns called Columns of Bertini and an inner medulla divided into medullary pyramids projecting into the calyx.

Each kidney has structures called nephrons which are the structural and functional units having two parts – the glomerulus and the renal tubule.

The renal tubule starts with a cup-like structure called Bowman’s capsule, by the glomerulus is enclosed and together they are called the renal corpuscle.

The tubule continues to form proximal convoluted tubule (PCT) followed by a hairpin shaped Henle’s loop having a descending and an ascending limb.

How useful is this solution?We strive to provide quality solutions. Please rate us to serve you better.
PREVIOUSThe glomerular filtrate in the loop of Henle gets concentrated in the descending and then gets diluted in the ascending limbs. Explain.
Related Videos 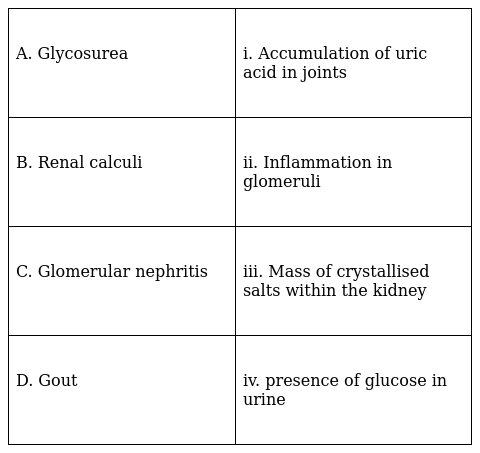 What is the composition of sweat produced by sweat glands?

Filtration of the blood takes place at

Describe the structure of a human kidney with the help of a labelled diagram.

The following substances are the excretory products in animals. Choose the least toxic form among them?