Chromatin material is a tangled fibrous mass. The chromatin material condenses to form chromosomes during cell division. Chromosomes contain information for inheritance of features from parents to next generation in the form of DNA (Deoxyribo Nucleic Acid) molecules. Chromosomes are composed of DNA and protein. DNA molecules contain the information necessary for constructing and organising cells. Functional segments of DNA are called genes.

Nucleolus may be one or more in number and is not bounded by any membrane. It is rich in protein and RNA molecules. Nucleolus acts as the site for ribosome formation, hence it is known as factory of ribosomes. 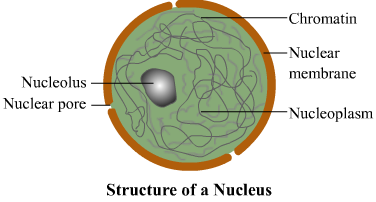 (i) Nucleus plays a central role in cellular reproduction, the process by which a single cell divides to form two new cells.

(ii) Nucleus controls cell metabolism and other activities of cell, hence it is also called Master or Director of the cell.

(iii) Along with the environment, nucleus directs the chemical activities of the cell. It determines the development and future form of the cell.

(iv) It is concerned with the transmission of hereditary traits from the parent to offsprings.

Why does the skin

Why does the Auth

How does he narra