Talking about the text

Describe the shifts in the narration of the events as indicated in the three sections of the text. Give a subtitle to each section.

The initiation shows the building of the strong ship ‘wave-walker’. The ship was professionally built and innumerable enthusiastic preparations were made in 1976 by the author and his family. The wave-walker had completed the first phase of the three year-journey very nicely when they were entering the Southern Indian Ocean. So the Captain hired two American men namely American Larry Vigil and Swiss Herb Seigler to help the Captain one of the world’s roughest seas. A certain shift in the narration in the first section is noticed when the ship encounters an atrocious weather when the high sea waves created a havoc. The water started seeping into the boat and to top it all, the Captain met with an accident. Even though the situation had only deteriorated, the best part was that everything was being handled by the people together as a family.

The second part of the story deals with the entire family and crew standing up together and overcoming the situation. The brighter side of human nature is reflected here wherein they all help one another be stronger every time. The young ones too display a sense of prompt action and fearlessness. They display the actual nature of brevity.

The third part of the story shows how the occupants of the ship have safely reached Amsterdam. Initially, the Captain had lost all hopes of being able to successfully reach the island. But a sudden announcement by his son cheered him up when he heard is son declare that he was the best father and captain the whole world.

How useful is this solution?We strive to provide quality solutions. Please rate us to serve you better.
PREVIOUSDescribe the mental condition of the voyagers on 4 and 5 January.NEXTDiscuss the following questions with your partner.What difference did you notice between the reaction of the adults and the children when faced with danger?
Related Videos

Pulley Important Questions | Not to miss for any exam33 mins

Everything to know about Enzymes40 mins

How to prepare effective comprehensive notes (Skill to master)45 mins

How to study organic Chemistry for JEE/NEET44 mins

The following three compound words end in -ship. What does each of them mean?

The following words used in the text as ship terminology are also commonly used in another sense. In what contexts would you use the other meaning?

Given on the next page is a picture of a yacht. Label the parts of the yacht using the terms given in the box. 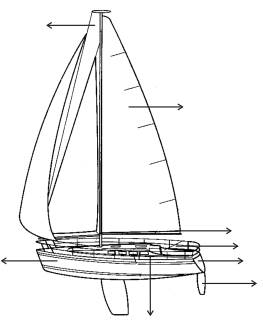 Discuss the following questions with your partner.

What lessons do we learn from such hazardous experiences when we are face-to-face with death?

Discuss the following questions with your partner.

Why do you think people undertake such adventurous expeditions in spite of the risks involved?

We have come across words like ‘gale’ and ‘storm’ in the account. Here are two more words for ‘storm’: typhoon, cyclone. How many words does your language have for ‘storm’?

Describe the shifts in the narration of the events as indicated in the three sections of the text. Give a subtitle to each section.

Have you heard any boatmen’s songs? What kind of emotions do these songs usually express?

‘Catamaran’ is a kind of a boat. Do you know which Indian language this word is derived from? Check the dictionary.

Identify the limiting reagent, if any, in the following reaction mixtures.

Dinitrogen and dihydrogen react with each other to produce ammonia according to the following chemical equation:

(ii) Will any of the two reactants remain unreacted?

(iii) If yes, which one and what would be its mass?

The hypotenuse of a right-angled triangle has its ends at the points (1, 3) and (–4, 1). Find an equation of the legs (perpendicular sides) of the triangle.

The following data are obtained when dinitrogen and dioxygen react together to form different compounds:

(a) Which law of chemical combination is obeyed by the above experimental data?

Fill in the blanks in the following conversions: