Describe the construction and working of an electric bell with the help of a diagram.

Important parts of an electric bell are:

An electric source like a battery is used as power for the electromagnetic circuit used in an electric bell. A switch is used as a circuit breaker which when pressed creates the sound of the bell. When the circuit is closed current flow into the armature wound around the soft iron core and thus produces magnetism in it. The free end of the armature wire has a small hammer which strikes the bell due to the electromagnetic effect produced in it due to the flow of current. As the circuit breaks flow of current stops, electromagnetic effect vanishes and hence the bell stops ringing. 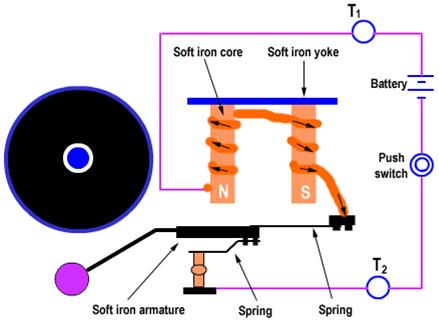 Working on an Electric Bell:

The working of an electric bell is described step by step as follows:

● The current is started in the circuit by pressing the switch.

● It powers the electromagnet and thus a magnetic field is created in it.

● The magnetic field attracts the iron strip and the hammer hits the bell.

● When the striker hits the bell the circuit is broken and the core loses magnetism.

● When the magnetism is lost the spring connected makes the hammer return to its original position.

● The contact is again restored of the switch is pressed again.

How useful is this solution?We strive to provide quality solutions. Please rate us to serve you better.
PREVIOUSDescribe the construction, working and usefulness of a dry cell, with the help of a diagram.
Related Videos

Fun and Games with Conjunctions46 mins

What, in your view, is similar, and what is different in Subramanian’s and Padma’s experiences.

Simplify and give reasons

A train moves at a constant speed of 75 km/hr.

(ii) Find the time required to cover a distance of 250 km.

Answer the following question in brief.

What were the social causes behind the struggle of 1857?