• Polymers can be classified into three main types based on structure. These are linear polymers, branched chain polymers and cross- linking polymers.

• The addition of HCN to D-Glucose leads to the formation of D-Gluconitrile and D-Mannononitrile.

• The addition of cyanide to the aldehyde group lengthens the glucose chain by 1 atom which generates a new stereo centre through which 2 configurations are possible.

• The structures of the produced compounds are as follows 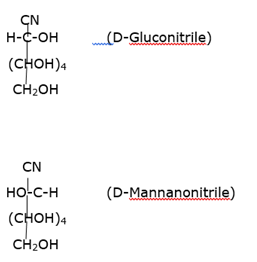 • One of the secondary structures of proteins is and alpha helix structure.

• The main deficiency caused by lack of Vitamin B12 is Beri-Beri.

• A person suffering from Vitamin B12 deficiency suffers from loss of appetite and retarded growth.

On the basis of w