8. Impact of Technology on Livelihoods

Describe how the situation of labour has changed in powerlooms and mills. Do you think this change is beneficial to the labourers or to the owner? Give reasons for your answer.

The situation of labours in powerlooms and mills were completely different. The labours in power looms were given salary according to the quantity or the pieces they produce while in mills they are provided with monthly salary; thus, in powerlooms the workers were paid less salary as compare to mills. In powerlooms, the labours were not given any healthcare facilities, pension, or social security provisions. Also, they are not allowed to form trade unions whereas in mills, workers form trade unions to decide the wages. The labours of powerlooms faced certain health issues.

This change doesn’t benefit the labours as they faced many problems. But this change was beneficial to the owners of the powerlooms in many ways –

i. Britishers who introduced powerlooms in India earned a lot of profit as the quality of the cloth produced was low.

ii. Proper facilities such as healthcare facilities, pensions and social security were not provided to the labours. This way they earned more profit, and the mills began to decline.

iii. They impacted the choices of the people in terms of fabric as they produced variety of fabrics such as shirts, suits, blankets, dhotis, towels, sarees, etc. This way powerlooms began to develop and mills declined.

How useful is this solution?We strive to provide quality solutions. Please rate us to serve you better.
PREVIOUSNarahari created the following list of activities where technology is not used.Do you agree with him? If not prove him wrong.a) While singing a songb) While cooking idlic) While performing drama on the staged) While making garland for saleNEXTWhat are the advantages of using CHs? Who benefit most? Why do farmers use CH?
Related Videos

Be a Champ of MCQs on Metals and Non-metals54 mins

Read the paragraph under the heading ‘New Skills and New Jobs’ and answer the following: What are the newly created jobs for young people in your area?

In this chapter, changes in technology in three sectors are discussed. In the following table identify a different example for each of these sectors that is not discussed here: 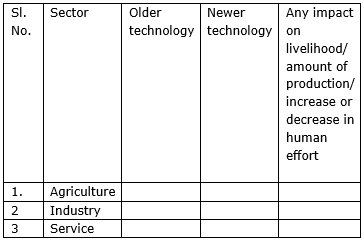 Locate the following in the world map:

Changes in technology lead to changes in job opportunities. Do you agree with this statement? Why?

Mallaiah is a farmer in Sripuram village. There are about 100 houses in the village.

Today all the work like planting, weeding, harvesting, spraying pesticides and fertilisersis done by machines. In olden days it was all done manually. There are more than 33 tractors and about 15 harvesters available in his village. A few of them are given on hire. The owners of the tractors charge Rs 300 per hour for tilling the fields. More and more farmers are now using these machines in their fields. Based on this information create a wall paper with illustrations and possible discussions between different groups of people in the village.

What are the advantages of using CHs? Who benefit most? Why do farmers use CH?

Describe how the situation of labour has changed in powerlooms and mills. Do you think this change is beneficial to the labourers or to the owner? Give reasons for your answer.

Narahari created the following list of activities where technology is not used.

Do you agree with him? If not prove him wrong.

a) While singing a song

b) While cooking idli

c) While performing drama on the stage

d) While making garland for sale

Prabavathi feels it is true that telephone technology has changed. She feels that new jobs are available to only educated persons. She also says that many people in India are not literate and hence modern technology is always biased to the educated.

Do you agree with her? Give your reasons.

The people live in forest and adjacent to forest cannot afford to use latest technology.

What measures do you suggest for improving their lives?