The three physical properties of water which helps in ascent of water in xylem are:

ii) Cohesion: Cohesion is the force due to which molecules of water stay linked together due to hydrogen bonding in between them. It provides strength against the pressure by the transpiration pull.

iii) Surface tension: It is the property of the surface of a liquid to resist an external force applied owing to the cohesive nature of the molecules of the liquid. 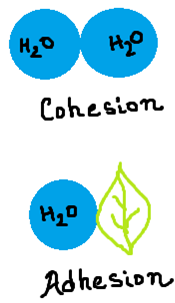 Capillary action is a result of adhesion and cohesion.

What are the ince

The letters of th

Find the (i) leng