Describe an activity to demonstrate that warm air is lighter than cool air.

The experiment to test that warm air is lighter than cool air is:-

I. Take two paper bags of the same size.

II. Hang the two bags in the inverted position on the two ends of a wooden stick.

III. Tie the stick from its exact mid-point by a thread and hang it in the balance position.

IV. Place a burning candle below one of the bags and do not place the candle too close but considerably close.

V. In some seconds you will see that the half part of the stick where we put the candle below gets lifted up with the bag.

VI. As soon as we remove the candle the raised part will get back to the initial position in some seconds.

This experiment shows that the warm air expands and rises up, the reason behind this is that when we heat up the air it expands and occupies more space than before but has same mass, so that is why is gets light weight than cool air which is compressed air and, Hence warm air lighter than cool air.

How useful is this solution?We strive to provide quality solutions. Please rate us to serve you better.
PREVIOUSSuggest some precautions to be taken to prevent the roof of a tin sheet from flying away during a fierce wind storm.NEXTThe picture in Figure 8.4 shows the tree line along the sea coast on an island near the equator. As shown, the tree tops are permanently bent in one direction. Are the trees bent towards the sea or away from it? Explain.
RELATED QUESTIONS :

Describe an activity to demonstrate that warm air is lighter than cool air.

Paheli kept an empty bottle made of plastic inside a refrigerator. After a few hours, when she opened the refrigerator she found the bottle had collapsed. Explain the possible reason.

Match Column I with Column II. There can be more than one match.

State whether the following statements are True or False:

(i) If wind flows from land to the ocean, then it is daytime.

(iii) The coast line of India is not vulnerable to cyclones.

Four schematic diagrams are shown in Figure 8.1 to depict the direction of sea breeze. Which of them gives the correct direction? 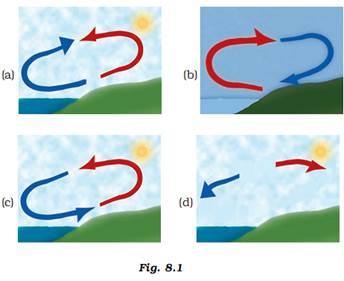 A fire alarm usually detects smoke in case of fire. Where should such an alarm be placed in a room?

Fill the missing word in the blank spaces in the following statements:

Various steps involved to obtain wool from fleece are given here.

(i) Picking out the burrs

Abbu Khan pushed Chandni into a small hut. This shows that he

(ii) loved her and wanted to save her life.

Pick the odd-one-out from each of the groups given below on the basis of respiratory organs. Give reason for your answer.