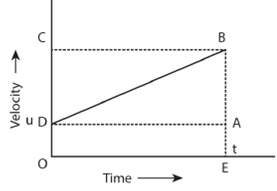 Graph shows the change in velocity with time for an uniformly accelerated object. The object starts from the point D in the graph with velocity u. Its velocity keeps increasing and after time t it reaches the point B on the graph.

The initial velocity of the object = u = OD = EA

Also from the graph we know that, AB = DC

This is first equation of motion

s = area of the quadrangle DOEB

This is second equation of motion.

From the graph the distance covered by the object during time t is given by the area of the quadrangle DOEB.

Here DOEB is a trapezium.

How useful is this solution?We strive to provide quality solutions. Please rate us to serve you better.
PREVIOUSDistinguish distaNEXTIn a 100 m race,
Related Videos

When a body start

A ball is gently

A racing car has

Do you agree with

If the side BC

Why does the lost