A wavefront is a surface of constant phase.

be the speed of the wave. Let

be the time it takes by the wavefront to advance from B to C.

We want to draw the reflected wavefront. Draw a sphere of radius

centred at A. Now, the tangent plane to this sphere passing through point C gives the refracted wavefront in accordance with Huygens’ principle.

Let the surface PP’ separate medium 1 and medium 2. Note that medium 1 is optically denser than medium 2. Let the speed of light be

in medium 1 and medium 2 respectively. Note that

be the time taken be the wavefront to travel the distance BC. 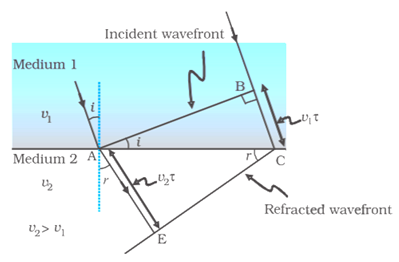 We wish draw the refracted wavefront. With A as centre, we draw a sphere of radius

Dividing the two equations, we get

(i) State and exp

Consider a ray of