Wave front is an imaginary surface which represents corresponding points of a wave in space which vibrate in unison .When identical waves having a common origin travel through, the corresponding crests and troughs at any instant are in phase and any surface drawn through all those points of the same phase will make up a wave front.

The principle itself is based on two assumptions:

(a) all points of a wave front of light in a vacuum or transparent medium may be regarded as new sources of wavelets that expand in every direction at a speed same as that of the original wave.

(b) A surface tangent to the wavelets constitutes the new wave front and is called the envelope of the wavelets. If the medium is homogenous and has the same properties throughout , the three dimensional envelope of a point source will be a spherical. This envelope describes the next new position of the wave front at that instant. 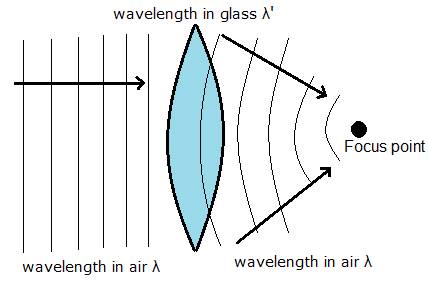 1. The phenomena of refraction and reflection both occur due to the interaction of light with the atoms that are at the surface of the separation of the two media. Light incident on these atoms, force them to vibrate with the frequency of light. But, the light emitted by these charged atoms is equal to their own frequency of oscillation. So, both the reflected and refracted lights have same frequency.

2. The energy of the light depends on the frequency not on the speed of the light. When light goes from a rarer to the denser medium , its velocity and wavelength change but frequency remains the same. Therefore, the decrease in speed does not imply a reduction in the energy carries by the wave.

3. In the photon picture of light, the intensity of light is determined by the number of photons incident per unit area around the point at which intensity is to be determined.

Write down a unit

If either <span l