When one of the ions or points in a crystal goes missing from crystal it is called F- center. 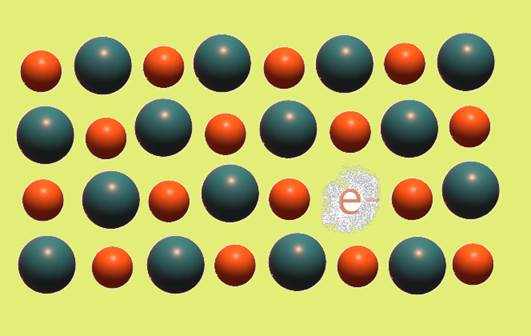 This shows the missing anion which is replaced by an electron. These involve dislocation of electrons which implies that the crystallographic studies are done to know the magnetic properties of such crystals. Also these free electrons show spectrochemical properties that are used in semi-conductors.

When a trivalent impurity is added to an intrinsic or pure semiconductor it is called as a p-type semi-conductor. The impurity addition is called as doping and the p-type refers to the positive charge of the hole. The have a higher hole charge density and electrons are the minor carriers of charge.

The dark dots are electrons and

When a material contains large number of atoms with their dipole oriented in opposing direction but not of equal magnitude, there is spontaneous magnetism which is called ferrimagnetism. These are similar to anti-ferromagnetic substances only that the magnetic dipoles are of different magnitude so the net result is that a smaller amount of magnetism properties remain in the material.

Ferrimagnetism is shown by ferrites of all kinds and magnetic garnets. For example, cubic ferrites like PbFe12O19.