This distance (r) isknown as distance of closest approach.

From the given data kinetic energy,

ϵ0 = permittivity of the space

Solving for r, we get

if k is doubled than let, r0 be the new distance.

Solving for r’, we get

Rutherford’s atomic model also called as planetary model can be

represent like the following diagram with the circular orbits in which

electrons are orbiting around the nucleus. 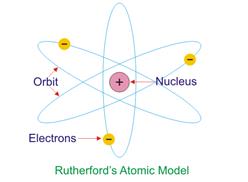 1. A revolving electron should emit radiation because of force on it. This leads to decrease in energy of the electron. So, concept of circular orbit is not valid.

2. Rutherford’s atomic model can’t explain the arrangement of the electrons in the atom