Where E is the ionization Energy, e is a charge of an electron, 𝜺0 is the permittivity of free space, h is Planck’s constant

So we can see e, 𝜺0,h are constants so ionization is directly proportional to mthe ass of ethe lectron, now electron is replaces by a particle having sthe ame charge as of electron and 200 times the mass of an electron so ionization energy becomes

i.e. Ionization energy is increased and becomes 200 times the original value, i.e. more energy is required to pull out an electron from neutral hydrogen atom in the ground state.

We know in an hydrogen atom a negatively charged electron is revolving around nucleus of hydrogen consisting of one proton, orbit is the well-defined circular path in which electron revolves around the nucleus these orbits have different energy level and electron have different speed depending upon the orbit in which it is revolving, the movement of electron can be characterized by state such as n = 1 for orbiting in the first orbit, n = 2 for orbiting in the second orbit and so on, the energy of n = 1 state is lowest and other states increase with n , when an electron absorbs energy in the form of electromagnetic radiations it jumps from lower energy level to higher energy level or higher states and when electron in higher energy state jumps to lower energy state it emits energy in form of electromagnetic waves, when an electron in a higher energy state(n >2 ) jumps to n = 2 state the spectrum formed due to emission of electromagnetic waves is called Balmer series

As has been shown in the figure 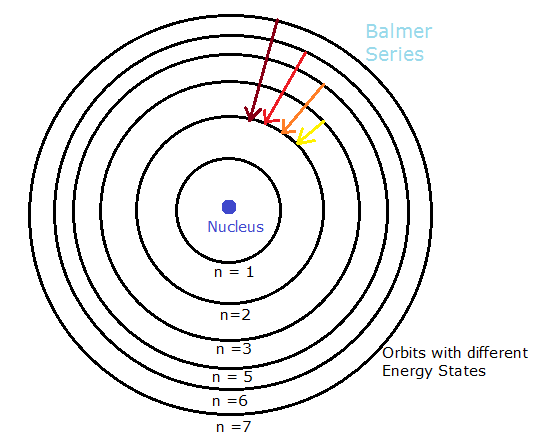 the wavelength of electromagnetic radiation emitted is given by the relation

Where 𝜆 is the wavelength of electromagnetic radiation emitted, R is Rydberg Constant , R = 107m-1 , nf is fthe inal state of ean lectron and ni is the initial state of ethe lectron, for Balmer series , since ethe lectron is jumping to sthe econd orbit so

now for 𝜆 to be minimum ,

should be maximum, i.e.

should be maximum , i.e.

Find out the wave

A set of atoms in