Decomposition is the process of breaking down of complex organic matter with the help of decomposers into smaller inorganic raw material such as CO2, H2O, and other nutrients. It constitutes of various processes:

1. Fragmentation: The breakdown of detritus (Organic matter) into smaller pieces by the action of detritivores (earthworms).

2. Leaching: The water-soluble nutrients move down into the layers of soil and get locked as unavailable salts.

3. Catabolism: Further the detritus is degraded into smaller pieces by bacteria and fungi through various enzymes.

4. Humification: Humification leads to the formation of a dark coloured colloidal substance called humus, which acts as reservoir of nutrients for plants.

5. Mineralization: The process of releasing inorganic nutrients from the humus in the soil is done by microbes and this process is known as mineralization

Decomposition thus leads to the production of a dark coloured, nutrient-rich substance called humus. Degradation of humus releases inorganic raw materials such as CO2,water, and other nutrient in the soil. 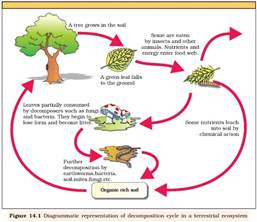 How useful is this solution?We strive to provide quality solutions. Please rate us to serve you better.
PREVIOUSWhat is primary productivity? Give brief description of factors that affect primary productivity.NEXTGive an account of energy flow in an ecosystem.
RELATED QUESTIONS :

Common detritivores in our ecosystem are_________.

The number of trophic levels in an ecosystem are limited. Comment.

Name an omnivore which occurs in both grazing food chain and the decomposer food chain.

What could be the reason for the faster rate of decomposition in the tropics?

Arrange the following steps of decomposition in a sequential order: Catabolism, Leaching, Mineralisation, Humification and Fragmentation.

In relation to energy transfer in ecosystem, explain the statement "10kg of deer's meat is equivalent to 1 kg of lion's flesh".

Among the following, where do you think the process of decomposition would be the fastest?

Differentiate the functions given in w.r.t. x.

Using elementary transformations, find the inverse of each of the matrices.

Using elementary transformations, find the inverse of each of the matrices.

Tick the item which best answers the following.

(i) sly and secretive

Differentiate the functions given in w.r.t. x.