Failure of segregation of chromatids during cell division cycle results in the gain or lose of a chromosome(s), called aneuploidy.

Failure of cytokinesis after telophase stage of cell division results in an increase in a whole set of chromosomes in an organism and this phenomenon is known as polyploidy. 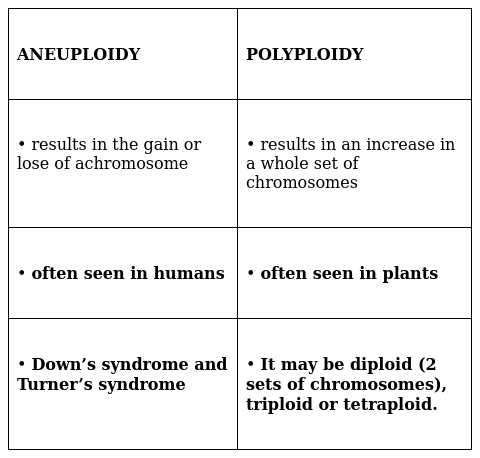 a. Trisomy of 21st Chromosome

The genetic disorder of the presence of an additional copy of the chromosome number 21 is called Down’s syndrome. The affected individual is shot statured with small round head, furrowed tongue and partially open mouth. Palm is broad with characteristic palm crease. Physical, psychomotor and mental development is retarded.

The genetic disorder of the presence of an additional copy of X chromosome resulting into a karyotype of 47, XXY is called Klinefelter’s syndrome. Such an individual has overall masculine development, however the feminine development (development of breast: Gynaecomastia) is also expressed. Such individuals are sterile.

The disorder caused due to the absence of one of the X chromosomes, that is 45 with XO is called Turner’s syndrome. Such females are sterile as ovaries are rudimentary besides other features including lack of other secondary sexual characters.

Why is the freque

It is said, that