(i) in the case of a single point charge and

(ii) in a constant electric field in Z-direction. Why the equipotential surfaces about a single charge are not equidistant?

(iii) Can electric field exist tangential to an equipotential surface? Give reason.

as shown in figure 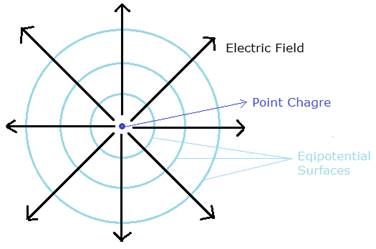 As Shown in Figure 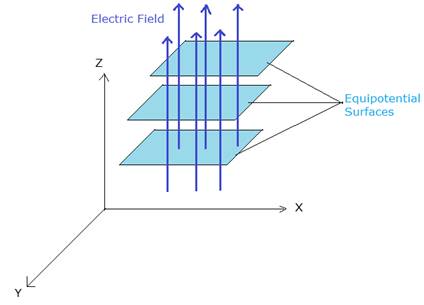 (iii) No, Electric field cannot be tangential to the equipotential surface as

If the fields are not normal to the equipotential surface, it would

Moreover, have a non-zero component along the surface. To move a unit test charge against the direction of the component of the field, work would have to be done. As work done is given by

i.e. work done will not be Zero but a finite value

However, this is in contradiction to the definition of an equipotential

Surface there is no potential difference between any two points on the surface, and hence no work is required to move a charge on the surface. The electric field must, therefore, be normal to the equipotential surface at every point and not tangential.

How useful is this solution?We strive to provide quality solutions. Please rate us to serve you better.
PREVIOUSA battery of emf 12V and internal resistance 2 Ω is connected to a 4 resistor as shown in the figure.(a) Show that a voltmeter when placed across the cell and across the resistor, in turn, gives the same reading.(b) To record the voltage and the current in the circuit, why is voltmeter placed in parallel and ammeter in series in the circuit?NEXT(i) State law of Malus.(ii) Draw a graph showing the variation of intensity (I) of polarised light transmitted by an analyser with an angle (θ) between polariser and analyser.(iii) What is the value of the refractive index of a medium of polarising angle 60°?
RELATED QUESTIONS :

(i) in the case of a single point charge and

(ii) in a constant electric field in Z-direction. Why the equipotential surfaces about a single charge are not equidistant?

(iii) Can electric field exist tangential to an equipotential surface? Give reason.

(a) Draw the equipotential surfaces corresponding to a uniform electric field in the z-direction.

(b) Derive an expression for the electric potential at any point along the axial line of an electric dipole.

A charge 'q' is moved from a point A above a dipole of dipole moment 'p' to a point B below the dipole in equatorial plane without acceleration. Find the work done in the process. 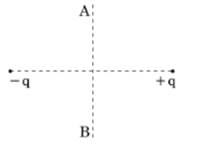 (b) Obtain the dependence of potential on the distance r of a point from the origin when r/a >> 1.

Figure 2.34 shows a charge array known as an electric quadrupole. For a point on the axis of the quadrupole, obtain the dependence of potential on r for r/a >> 1, and contrast your results with that due to an electric dipole, and an electric monopole (i.e., a single charge).

In a hydrogen atom, the electron and proton are bound at a distance of about 0.53 Å:

(b) What is the minimum work required to free the electron, given that its kinetic energy in the orbit is half the magnitude of potential energy obtained in (a)?

(c) What are the answers to (a) and (b) above if the zero of potential energy is taken at 1.06 Å separation?

(a) a constant electric field in the z-direction,

(b) a field that uniformly increases in magnitude but remains in a constant (say, z) direction,

(c) a single positive charge at the origin, and

Two charges 5 × 10–8 C and –3 × 10–8 C are located 16 cm apart. At what point(s) on the line joining the two charges is the electric potential zero,Take the potential at infinity to be zero.

Differentiate the functions with respect to x.