(i) Age Structure or Composition: It refers to the number of people in different age groups in a country, which is one of the most basic characteristics of a population. A person’s age influences what he needs, buys, does and his capacity to perform. The number and percentage of a population found within the children, working age and aged groups are notable determinants of the population’s social and economic structure, the population of a nation is generally grouped into three categories. Children below five years, working age (15-59 years), aged (above 59 years). This structure can be represented as under: 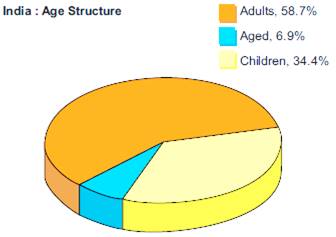 (ii) Birth Rate: It is the number of live births per thousand persons in a year, which is a major component of growth because in India, birth rates have always been higher than death rates.

(iii) Death Rate: The death per thousand persons in a year is the number which is known as death rate. The main cause of the rate of growth of the Indian population has been the rapid decline in death rates. Since 1981, birth rates have also started declining gradually, resulting in a gradual decline in the rate of population growth.

How useful is this solution?We strive to provide quality solutions. Please rate us to serve you better.
PREVIOUSWhy is the rate oNEXTWhat are the sign
Try our Mini CourseMaster Important Topics in 7 DaysLearn from IITians, NITians, Doctors & Academic Experts
Dedicated counsellor for each student
24X7 Doubt Resolution
Daily Report Card
Detailed Performance Evaluation
view all courses

The side BC of ΔA