Huygens’ principle gives the wave front at any time allowing us to determine the shape of the wave-front at a later time. According to Huygens’ construction,

 Every point on a wave front acts as a source for secondary wavelets.

 The secondary wavelets spread in all directions in space (vacuum) with the velocity of light.

The envelope of wave-front of secondary wavelets, after a given time, along forward direction gives the new position of wave-front.

Consider the plane wave ABC incident on a convex lens. Using Huygens’ construction, wave-front emerging out of the lens would be A’B’C’ as shown: 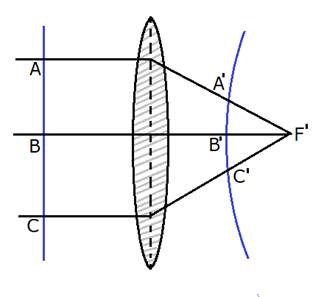 (a) The frequency of a wave stays invariant to change in medium as it is the property of the source.

(b.) Ratio of velocities in the two media,

The mixture a pur

A jar of height h