Nephrons are known as the structural and functional units of kidney. They are also known as auriferous tubules, renal tubules or simply kidney tubules. Each kidney tubule is composed of the following structures:

i. Bowman’s capsule: It is a thin walled cup whose hollow internal space continues into the tube. The outer concavity of the cup lodges a knot like mass of blood capillaries called the glomerulus. This is where the ultra filtration occurs.

ii. Proximal convoluted tubule: It is the starting of the convoluted region lying within the cortex of the kidney. This is where the reabsorption starts.

iii. Loop of Henle: It is a hairpin shaped structure which connects the proximal and the distal convoluted tubules and lies within the medulla.

iv. Distal convoluted tubule: It is the end part of the kidney tubule which opens into the collecting duct. This collecting duct receives the concentrated urine which it carried to the urinary bladder.

Thus, nephrons are the structural and functional units of kidney. 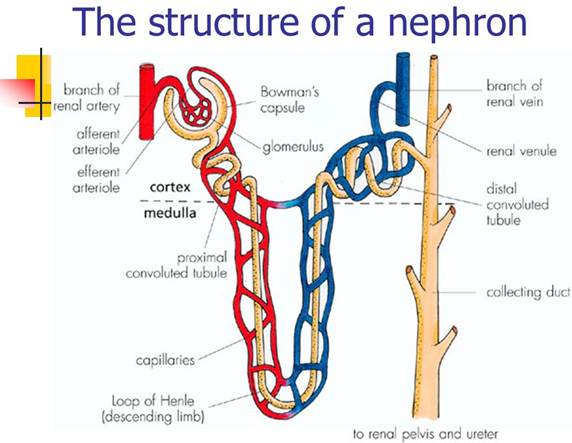