Darwin observed this in the species of black birds (now called as Darwin’s finches) on his journey to Galapagos Island. He saw that there were a variety of finches on the same island and also found out that all the varieties had evolved there itself. These varieties ranged from the original seed-eating finches to vegetarian finches and insectivorous finches and many other forms. All these forms arose due to the alteration in their beak size and structure. 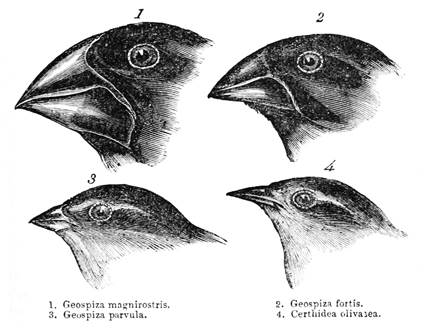 (a) It is an example of convergent evolution.

Explanation: They differ in their structure but perform the same function due to their similar adaptations.

Structural difference is based on the fact that the octopus lacks ‘blind spot’ in its eye. However, their function is the same, which is to see.

(b) It is an example of divergent evolution.

Explanation: They have the same structure but are adapted to perform different functions based on their needs.

(c) It is an example of divergent evolution.

Explanation: Structurally, thorns and tendrils are the same. However, the thorns in Bougainvillea are used as defence mechanism whereas the tendrils in Cucurbita are used for creeping/climbing.

(d) It is an example of convergent evolution.

Explanation: The flippers are used for the same function in both dolphins and penguins, which is to swim. However, penguins evolved from birds that can fly whereas the dolphins evolved from mammals.

We are told that

How do we compute