1. Biogas is a natural and pollution free source of fuel which is most common in rural areas.

2. Biogas is a mixture of gases which contains mainly methane. It is naturally produced in biogas plants by the activity of microbes mainly anaerobic ones. During their growing stages microbes produce various gases as the end products.

3. The bacteria used in biogas production are anaerobic bacteria who loves cellulose. Hence they mainly grow on cellulosic materials. During their growth period they produce gases like methane, carbon dioxide and hydrogen. These bacteria come under a category called methanogens.

4. A common bacteria belonging to methanogens are Methanobacterium. These bacteria are found in huge quantities in the excretory product of cattle or the cattle dung. As mentioned earlier that these anaerobic bacteria love cellulosic material, this Methanobacterium is found in the rumen of the cattle.

5. As the biogas production requires cow dung and water initially which already contains Methanobacterium in huge quantities, there is no need to add inoculum. 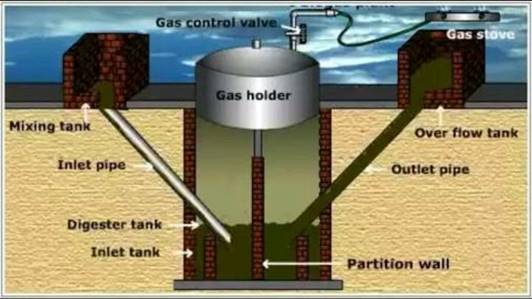