Correlation between physiographic and internal waterways.

India has an extensive network of waterways including lakes, canals, oceans, and other inland water systems. The total navigable area is 14500 km. Waterways have been the most common means of transport from earlier days. Waterways are the cheapest and easiest way of carrying bulky goods over long distances. One of its greatest benefits is that it does not require any route construction or maintenance. Waterways can be inland waterways or sea routes. Navigable rivers, canals, backwaters, and lakes are used as inland waterways. It was the major means of transportation before the advent of railways and roadways. Inland waterways are the only means of transportation through dense, impenetrable forests and areas defined by certain tribal groups. Sea routes and oceanic routes are mostly used for transporting bulky goods from one country to another. Waterways is a major means of domestic and foreign trade.

How useful is this solution?We strive to provide quality solutions. Please rate us to serve you better.
PREVIOUSWrite notes on:Air transport in IndiaNEXTWrite notes on:Importance of standard time
Related Videos

Agriculture and its Importance35 mins

Tourism is an invisible trade.

Which factors attract most tourists in Brazil?

The indicator of development in a country is the development of transport in that country.

The development of tourism in India has begun recently.

What are the difficulties in the development of the railway system in Brazil’s internal areas?

Answer the questions after reading fig 9.2 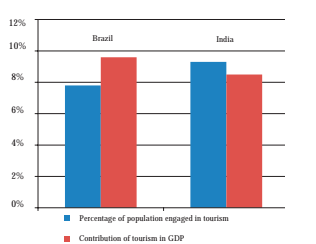 a. What type of graph is shown here?

b. What does the graph show?

c. Which country’s tourism has a larger share in the contribution towards GDP?

d. Which country has a larger population engaged in the tourism sector but contributes lesser in GDP?

Arun called his mother from Digboi at 7 AM. At what local time will his mother pick up his call at Jaisalmer?

What are the factors responsible for the development of these tourism sites in Brazil?

On what basis will you decide how many standard times should be there in a country?