Copy and identify the types of neurons given below: 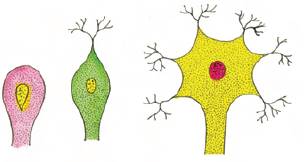 First one is unipolar neuron as it has a single extension from its cyton.

The second one is bipolar neuron as it has two extensions at the opposite poles. One extension acts as dendrite and the longer extension as the axon.

The third one is multipolar as it has multiple extensions which are dendrites through its cyton and a single extension in opposite direction which is axon.

How useful is this solution?We strive to provide quality solutions. Please rate us to serve you better.
PREVIOUSCopy the diagram and label the parts with the help of the clues given:i) It is otherwise called supra renal gland.ii) It secretes two hormones, namely aldosterone and cortisone.NEXTHere are some statements about meiosis. State whether each of them is true or false:i) It takes place in somatic cells.ii) Meiosis is also called reduction division.iii) The pairing of homologous chromosomes is called crossing over.iv) Meiosis leads to variations which form the raw material for evolution.
Related Videos

Copy and identify the types of neurons given below:

Copy the diagram and label any two parts in the group given: 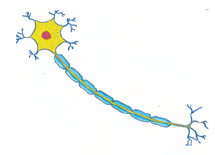 Describe the structure of a neuron with the help of a neat, labelled diagram.